My wife was out shopping over the weekend and sent a rather alarming text message: Her debit card purchase had been declined.

This instantly sent a terror down my spine as I pictured our bank account having been drawn down to zero with someone else living the good life.

Luckily, I was able to use my Blackberry to log in to our bank’s mobile site.  It told me that our balance was right along the lines of what it should be (having looked yesterday), and I was able to look at the most recent transactions and see only one had appeared since I looked yesterday, which was for buying a pizza the night before.

In other words, absolutely nothing was out of the ordinary.

Read moreAnother Reason To Check Your Bank Account Every Day

OK, so my decision isn’t as captivating and probably won’t cause as much drama as Lebron’s did earlier in the year, but I thought I’d share it anyways!

A few weeks ago I noted that our health care options came out and that none of them looked all that appealing, with our costs going up in a big way.

There were three options available to us for next year:

I haven’t been riding my bike too much this summer and that has bummed me out.  We didn’t even take them down last year, because Little Boy Beagle was just a newborn, and things were crazy enough without having to worry about the bikes.

This year, we took them down, but mine was cursed with a problem with it changing gears by itself, which is extremely annoying to say the least.  I kept putting off and putting off taking it to a bike place, mostly because I dreaded paying the bill.

We’re going on a trip for our anniversary next month where we’ve gone in the past and bikes are a must-have for us.  I knew I couldn’t put it off any longer, so last week I toted the bike off to the repair shop.  I had e-mailed them and described my problem, and they had given me a ‘ballpark’ quote of around $80.  So, knowing that things usually cost more, I was figuring on dropping at least a hundred smackers for this repair.

Back in May, I wondered what would happen to the GMAC Demand Notes name since Ally seemed to be taking over the GMAC brand.

It didn’t take long, probably no more than a few weeks, before I got notification in the mail announcing that it would indeed be called Ally Demand Notes as it looked like the GMAC name would be erased from anything and everything.

I can understand that since GMAC was associated with pretty much everything bad about GM, the banking industry, the housing bubble, and the credit crisis.

Everything on the website and the information I get in the mail has completely eliminated the GMAC name and they are now called ‘Ally Demand Notes’.

The checks still say ‘GMAC Demand Notes’ but since they are underwritten by a third party bank, they are still valid and will be honored.  I confirmed this with customer service.

If you are eligible for participation in Ally Demand Notes (you have to be a GM employee or retiree, or related to one), I still think it’s a good investment for long term cash holdings, where you are agreeable to some risk (they are considered a money market and are not FDIC insured).  The interest rate is 2.25% which is pretty much double of even the best savings account or CD rates.

Though there is the risk I mentioned, I think (for the moment) that Ally looks to be on solid footing.  If my opinion changes, I will definitely let you know!

I’ve never had the guts to go for it on my own in terms of running a business.  I have enjoyed working, at different points in my working life, for a couple of different solo business owners, so I found the list of five steps for success, as presented in Business Insider by self-made billionaire Richard Branson, very interesting:

1. Hire passionate, excellent people.
2. Never forget that your employees make your business.
3. Don’t concentrate on mistakes — focus on praising great things, instead.
4. Have fun.
5. Don’t be afraid to just go for it.

Here’s my take on each:

They outlined three main reasons why the Canadian housing market has barely flinched in the wake of global turmoil, recessions, and housing problems south of the border and around the world.

When it comes to personal finances, every so often I take a look at things over the long term.  For as much progress as our family has made paying down debt, contributing 10% of my income to retirement, and the like, from a personal finance perspective it often feels like we’re stuck in neutral.

Here are a few examples of how it seems like we’re spinning our wheels:

I’m still fighting the good fight and keeping my chin up, but every once in a while, it seems like the one-step-forward two-steps-back adage.

The sucky part for me is that most of these ‘neutral’ indicators have happened during the prime of my working career, and the same probably holds true for those around my age (mid-30s).  In the past, this is where many people would get established financially, but now it seems we can barely keep up from the month before.  This could have long lasting repercussions as the effects of this personal finance neutrality will certainly impact us for the rest of our lives.

A few months ago, the health care reform discussion was all the rage and dominated most news stories that were centered around politics.

Now that it’s been passed, I think people have moved on.  Most political discussions I hear of now seem to focus either on the upcoming elections or the government’s (lack of) response to the oil spill.

However, I thought it was noteworthy to go back to health care and point out a couple of pretty major changes to those that use flexible spending accounts to save money on health care related costs.

A flexible spending account, for those who may not be familiar, allows you to set aside pre-tax dollars that can then be spent on reimbursable health care costs, including co-pays, non-covered costs, prescriptions, and other items.  This essentially gives you a ‘discount’ equivalent to your marginal tax rate on health care costs.

Read moreChanges To Flexible Spending Accounts On the Horizon

I can understand this.  GMAC has had a lot of negativity pressed upon it over the recent years from being part of the sub-prime mess to needing government intervention (aka abailout). GM is still not the most liked name, and I think that moving away from that association can only benefit them.  Plus, you have to think that they want to make loans across the board and not be associated primarily only with writing loans for GM dealers.

All in all, I think it’s a pretty good strategic move.  They tested the waters, so to speak, by trying it out last year with the bank, and people have seemed to take it pretty well.  I’m guessing that the favorable reaction allowed them to move forward with Phase II (known internally as the ‘warm liquid goo phase‘) allowing them to re-brand the rest.

I have stuck with my GMAC Demand Notes account for some of our cash holdings.  It’s been holding steady paying 2.15% which is pretty much double what ING and others are paying.  The downside, of course, is that it’s not FDIC insured, but as of now, the worst of the storm seems to have passed so I’m thinking the risk is OK for now.

I wonder if the rates will change at all once this becomes Ally Demand Notes (or whatever they deem the new product to be).  We’ll have to wait and see.

Detroit has been in a population decline for decades and decades.  Simply put, the city is now too big for itself.

The new mayor has proposed shrinking the footprint of Detroit by identifying areas which are currently sparsely populated, and relocating these residents to other areas.  The goal would be to create denser neighborhoods, which could then receive the concentration of services.

Right now, the city just can’t sustain itself.  The city once had about 2,000,000 residents, and now has less than half that.  Still, police must patrol all areas. Roads must be maintained.  Garbage pickup still has to cover all areas.

But with the population decline, the city can’t afford to offer these services across the board.  It is simply unsustainable.

It’s going to be a long road ahead if the city does move forward with this.  I’m not sure that it can actually succeed, but it’s a unique approach to a problem that has been around for decades and doesn’t seem to show any signs of ending soon. 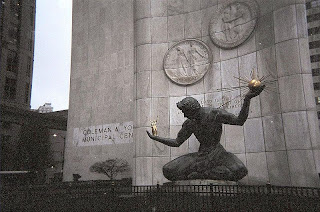 Many of us have looked at our finances and taken measures to simplify them.  We cut out ‘lattes’, we eliminate or reduce debt, we cut spending where we can.  It’s interesting to see a city actually try to do such a thing on such a grand scale.

I know many people across the country see Detroit as a hellhole, and there are areas where this is indeed the case.  Still, the city and the surrounding area are full of good people, hard workers, great landmarks, and as one of the residents of the surrounding area, I continually hope that Detroit can someday right the ship.

It often looks bleak but when I look at the fact that many people and families have turned their own situations around, it gives me hope.