The ‘Occupy Wall Street' movement has been getting a lot of press.  I was startled when I saw that 700 people had been arrested over the weekend for disrupting traffic on the Brooklyn Bridge.  That is a lot of people to be arrested and shows that the movement is gaining attention, traction, and publicity.

In addition, it looks like there are going to be move ‘Occupy' gatherings at other cities.  Michigan has two planned that I can tell, with the one in Detroit on October 21st already getting attention on local discussion boards. 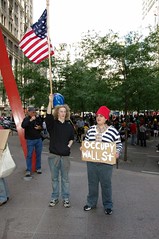 Here are my thoughts on what I've seen so far:

What's next for Occupy Wall Street?  I don't think anybody really knows.

Do you know anybody that's involved in this protest/movement/gathering?  If you were to send one message along, what would your message be?