How To Unclog A Sink Using A Plunger

One of the items on my Spring To Do-List was to unclog our bathroom sink, which was draining slow. This past weekend, I set out to clear it up and was able to do so with the use of just a few items.

What I used:
Small plunger (not one to unclog a toilet, that was too big for the small bathroom sink)
Drano Max Gel Clog Remover
Spray Cleaner
Rags

Background:
The drain has been running slow for quite some time.  It never got fully clogged but didn't seem to drain really fast.  Every couple of months, I would use some Drano Max Gel remover, and that would clear things up a bit, but I could tell it never fully did the trick.  Plus, each application seemed to buy less and less time between usage, so I knew it was time to tackle the problem head on. 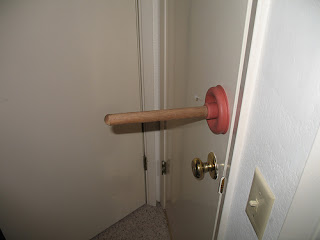 The whole job took about 15 minutes from start to finish.  I had been afraid that I would need to open the drain trap which could take a lot longer and be a lot more messy, but luckily I was able to avoid that.

A plumber would have probably charged $100 to do the same work, so I felt pretty pleased with my work and my results!