The Kidney Stone Of Automobiles

Recently, my wife called me at work one day saying that there was something wrong with her car.  We had just driven in it the day before, and everything was fine.  Now, it was making a terrible grinding noise.

I only work a few minutes from home so I went home during lunch to see what was going on.  It didn't take long to find that the problem was coming from the driver's side right wheel area.  Something was grinding somewhere as an awful squeal was present any time the tire turned. 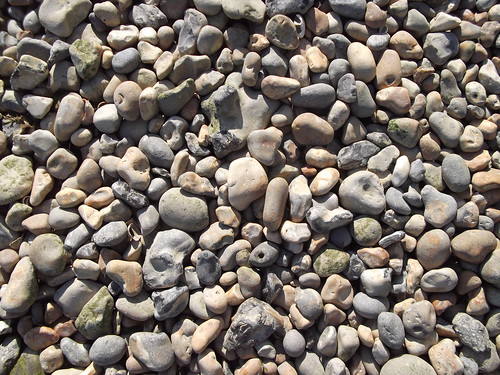 I called my father-in-law as he's pretty handy with cars.  I narrowed it down to either: Something was wrong with the brakes / wheels or something had gotten lodged somewhere.  I asked him about whether I should: Use the jack and such to remove the wheel or take it to the nearest tire shop.

He had some stuff to bring over anyways (at least that's what he said, I think he just wanted to come visit his grandkids whom he hadn't seen in a while *lol*) so he volunteered to come by that evening.  He has a hydraulic lift and an electric air wrench, so he was able to get the tire off in less than a minute.

After looking around, we found that something indeed had gotten lodged between the rotor and the backing plate.

It was a pebble.  A pebble about the size of the head of a pin.  In other words, tiny.

Yet the sound that this little pebble made was enough to think that the entire wheel was going to fall off.  It was that loud.

The first thing I thought of was that it was like a kidney stone.  Really tiny yet really able to pack a punch (and produce wailing sounds as well *lol*).

It still boggles my mind as to how this got in there and was able to lodge itself there, especially since the drive before had given no indication of it's presence. All I know is that I was happy that this didn't turn out to be an expensive repair.  The biggest ‘cost' was that our two-year old son was disappointed because the trip my wife was going was to take him to his weekly story time at the library, which we felt bad about, but he got over pretty quickly (as two year olds are able to do!)


Have you ever had something that made it sound like a lot more was wrong than really was?